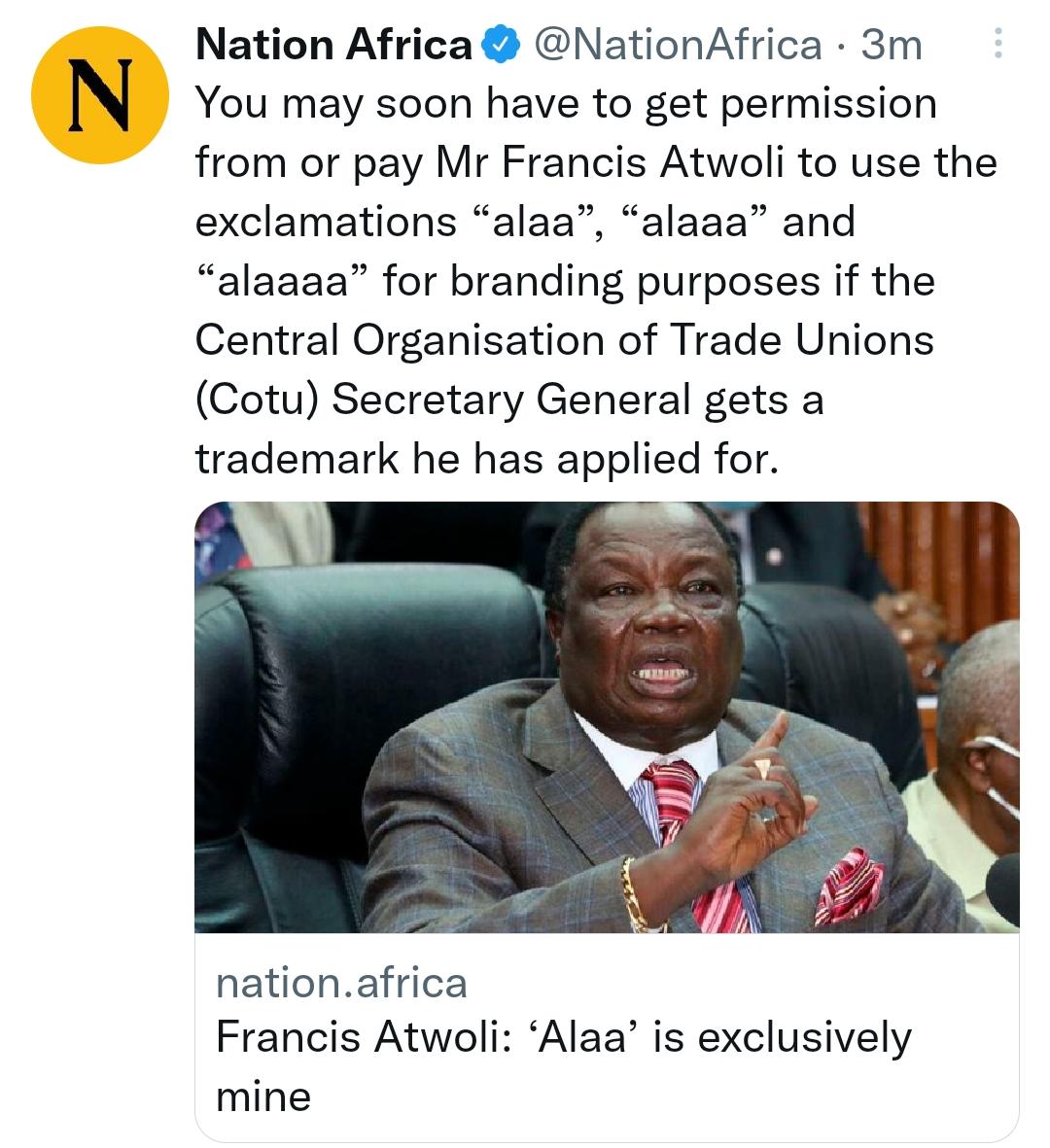 Recently there has been an interesting Trademark registration by the Central Organization of Trade Unions (COTU) Secretary General, Francis Atwoli. He is known for using the phrase “Alaaa” whenever he reacts or makes remarks in public or media speaking engagements. It’s a phrase popularly used by Swahili speaking people to express surprise or disbelief. So, when the local dailies report that he will own the phrase exclusively… that is not entirely true.

Simply put; A trademark is protection granted to the use of a name, colour, made up word, phrase/ slogan, logo, fanciful use of letters or numbers, to brand a good or service. The use must not be descriptive and should be uniquely used to set apart a good or service from its competitors.

The rationale of trademarks is to grant exclusive use in trade in particular declared classes of business. When registering a trademark, we have what we call the “Nice Classification” where an applicant identifies his classes of trade to declare “exclusivity”. This word is in quotes because it is only exclusive in so far as the declared classes are concerned. Therefore, prohibiting competitors from using the protected word or phrase from use by directly competing goods or services. This is to protect consumers from confusion and to protect the brands from losses arising from confusion in the market.

When it comes to popularly used words in the country of registration, a disclaimer has to be registered because they cannot exclude or deter anyone from using the word or phrase in its ordinary day to day use.

That is why in my post here, I mentioned that “Hakuna Matata” in the US granted Disney exclusive use insofar as the classes they declared and registered in are concerned. Also, US citizens do not speak Swahili as a native language, thus, the use is unique and non-descriptive.

Same would apply with use of words like “Maghreb”  – Cafe Maghreb at Serena, “Thai Chi” – a restaurant at the New Stanley Hotel – possibly a corruption of “Tai” in Chinese that means supreme, grand or great. I could go on and on about various brand names derived from other languages that are unique in the Kenyan context; and predominantly so because those or not our primary languages. It is also noteworthy, that sometimes, the same word could be used in different languages and have different meanings. All the languages of the world have borrowed from each other or built each other- a symbiotic relationship of some sorts.

Observe Mr. Atwoli’s registration. He has declared the registration in the classes 25, 28, 35, 38, 42 and 45. Meaning businesses in the nature of trade highlighted in these classes cannot use the phrase or mark in advertising or to associate their mark with the phrase. For example, a Telecommunications company running an advertisement with the phrase, “Alaaaa! Kumbe ni wewe?” Or something… Would the number of .aaa’s matter in the context of this registration? For your information, one of the grounds to oppose a trademark would be phonetic similarity or to claim a trademark infringement.

My question though is whether this trademark shall make commercial “cents” to Mr. Atwoli being that it has more ‘umph‘ when it is said out loud. Perhaps a sound trademark (soundmark) should have been considered, just like the Metro-Goldwyn-Mayer Lion Roar. However, since I last checked and attempted to register a sound trademark at Kenya Industrial Property Institute (KIPI), Kenya is yet to have the legal and policy “infrastructure” to register sound trademarks and olfactory marks (pertaining to the smell of a product). Perhaps it’s time?

A polite note to local dailies and reporters, please stop misleading the public by confusing “Copyright” and “Trademarks”. I believe it’s high time that reporters and writers also learn more about Intellectual Property Law to aid in effective reporting.

I must admit, the sensational by-lines did offer some comic relief based on the comments by various readers and social media users.

*The writer invokes copyright exceptions in the use of the images herein for purposes of education and review.*

Every action has a...

The Fashion Ecosystem in times of COVID-19: Global Thoughts & Experiences

You Snooze, You Lose: Tough Lessons for Fashionprenuers against Fashion Empires