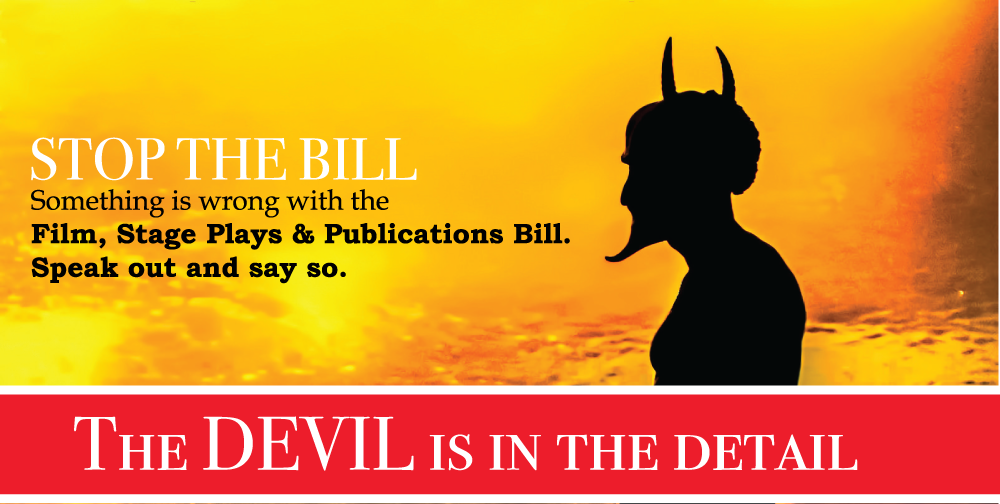 FROM KING TO PAUPER: THE FUTURE OF KENYAN CONTENT WITH THE PROPOSED KFCB BILL

Where do I start? To put it mildly, the proposed piece of legislation by the Kenya Film Classification Board has got to be the joke of the century! I have read its contents and I am equally amused as I am dismayed and possibly heartbroken by the repercussions this legislation would have if passed. The film industry would be as good as dead. Just a few months ago we ushered in the digital migration and we were excited how content would continue to be king and employ more and more Kenyans. Well…

Let us look through some of these ludicrous proposed provisions. Sit tight and peruse to see how the bill through Section 3 (1) attempts to control everything from online content, to advertisements, to magazine contents and posters, video games as well as introduce ISP liability. Talk of a desperate attempt to legitimize and legalize an institutions’ far-reaching and impractical mandate.

First and foremost, in the interpretation clause, I was keen on reading the definition of “national values”, “aspirations of the people” and “moral values”. Can someone attempt to define these terms? In my view these are the most ambiguous terms to be used in a piece of legislation in this day and age. Nobody knows what it means and it assumes that a society will always be stagnant and that situations or culture will never change. Content is expression of a society. With such ambiguity, we are already walking into a danger zone to curtail freedom of expression and freedom to create.

The application process of the so-called filming certificate baffles me. This is now documented and is what used to be the mandate of the Department of Film Services. The merits of this so called film certificate make no sense at all. In addition, it does not make business sense because a producer or writer, and other producers of content mentioned in Section 3, will have to send their manuscripts and all other content related materials for review and approval by the Board’s CEO including alterations and additions. Who knows what they would be looking for and how long such a process would take. I already see my creative friends who work in advertising agencies cringing as they read this post. Brand managers and marketing personnel should also be worried for so many reasons that would take another blog post to try and elaborate. Creativity is about to die a cruel death in Kenya!

How laughable is it that the Board shall appoint a police officer to be present during the shooting sessions! Section 26 is all kinds of dangerous for any producer. It is laced with all sorts of ambiguity. Need I mention that where this police officer and his social and family background is highly likely to influence the content? Imagine if the police officer is a 60 something year old “mzee” from “mashinani” policing your shoot. He just may just as well earn the title of “co-writer” or “co-director” together with KFCB. Someone insert the “laughing so hard I am crying” emoji please!

Then there is Section 39 that is attempting to introduce ISP liability. The internet is a very valuable and vast infrastructural item. An attempt to police it is a mere confirmation of one’s lack of knowledge on how the Internet works. I would probably liken it to one trying to police an electric current. Safaricom, Wananchi Online and your comrades, you need to fight this clause with all your might. Or else you will be in dancing in court with KFCB on a very regular basis for liability on content that you have no creative input whatsoever.

Under Part VII, stage plays are about to be a yearlong production. The approvals of the manuscripts, posters, and edits made midway during rehearsals are subject to the same ludicrous process as films and advertisements. The Board will even decide for the stage play producers whether their venue is appropriate or not. This might as well kill any hope the theater business people had for their craft.

With the provisions on publications (part X), I refuse to say goodbye to my Cosmos, Esquire and all those fabulous foreign and local magazines I so love to read. The favourite parts of the magazines like relationship columns are about to be policed too. Oh, will the Board ban books by Mills and Boon novels too and its cousins? Having worked in the magazine industry, does that mean that a writer would have to submit their article to KFCB first before sending it to their editor? And newspaper and magazine vendors have no way of escaping this one too (Section 55).

The offences and penalties suggested in this Bill are purely outrageous and outlandish! For example, a photographer liable for being employed on set to be DOP for a “non-compliant” production or an actor and a fine of upto Kshs. 500,000 or no less than two years imprisonment or both! Ha! Where does the buck stop KFCB? And these monetary penalties! They are not justifiable and quite outrageous. This bill wants to put money in some undeserving hands.

I could go on and on about this bill. It needs to be deleted and compensate all the eyes that have read it. Let us KILL THIS bill!!! Content is about to become a pauper and the further raise the rate of unemployment in Kenya.

WHY ARE IP-RELATED AMENDMENTS SO HAPHAZARDLY EXECUTED IN KENYA? LET’S QUASH THE WANGA BILL!

Photo by Kelli Tungay on Unsplash If you...

Every action has a...