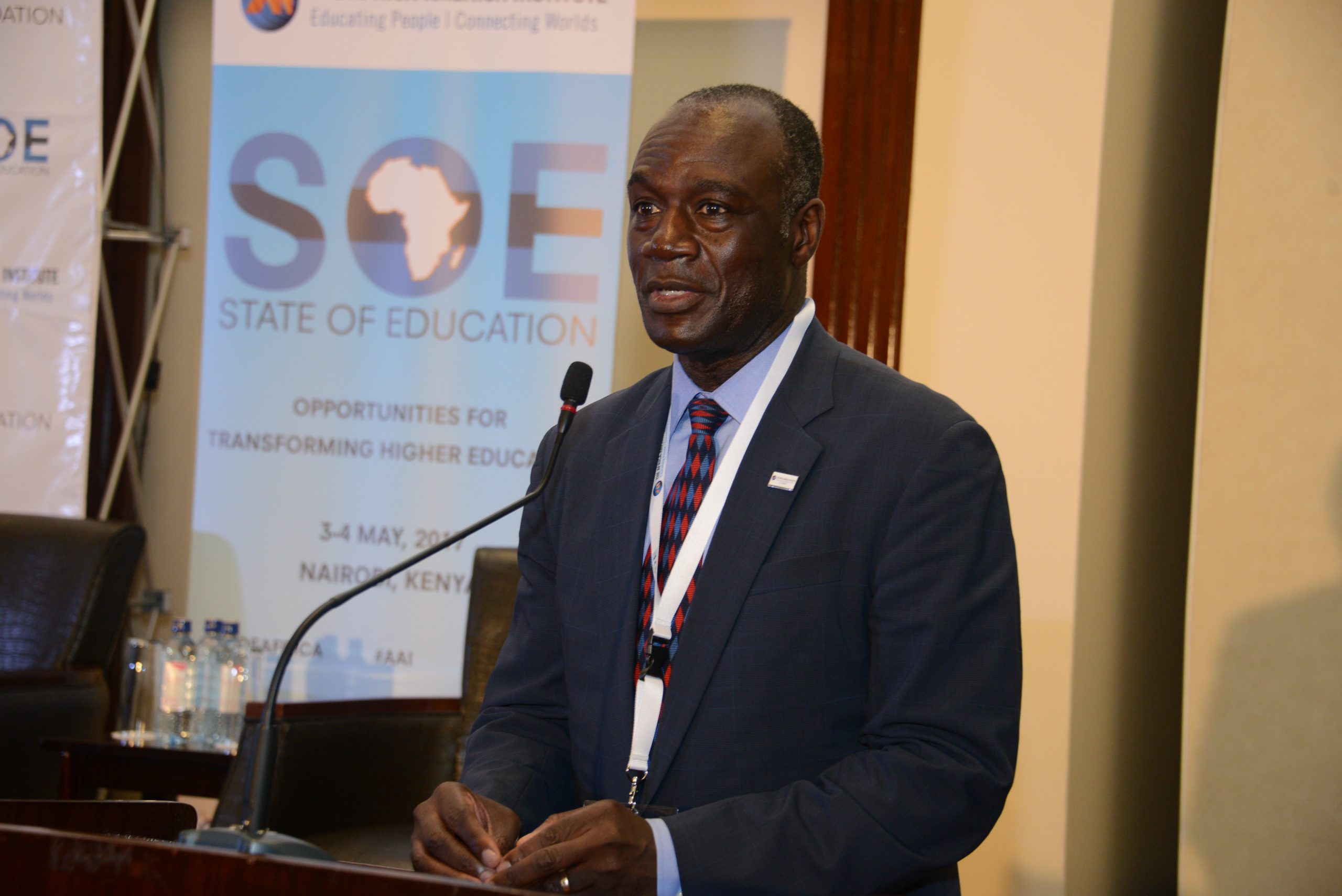 STATE OF EDUCATION 2017: THE QUEST TO INNOVATE AROUND EDUCATION OPPORTUNITIES

“Africa is the youngest content in terms of the age population and has some challenges to meet the needs of this population.” – Kofi Appenteng, President, Africa-America Institute.

1.By 2040, Africa is expected to have the world’s largest labor force, with an estimated working age population of 1 billion (AAI SOE 2015 report). Yet the percentage of national budgets allocated to higher education in Africa stands at 7% compared to 76% in the rest of the world, according to Association for the Development of Education in

2. The vision for the African Union Commission Agenda 2063 is that 70% of all high-school graduates go on to have tertiary education, with 70% majoring uating in subjects related to sciences and

3. A new March 2017 study released by the Mo Ibrahim Foundation shows a positive correlation between levels of youth employment and the gross enrollment in higher education in the past 10 years, from 2006 to

4. It has been estimated that, on average, it takes a university graduate five years to secure a job in Kenya, according to the British Council’s Going Global 2014 “Can higher education solve Africa’s job crisis?”

5. According to Duke University Professor Cathy Davidson, sixty-five percent of today’s 7 / 8 year-old will end up working in careers that haven’t even been invented yet.

There are significant shortages of academic staff in universities across the There are already 50% more students per lecturer in Sub-Saharan Africa than the global average, according to the British Council’s Going Global 2014 “Can higher education solve Africa’s job crisis?” Report.

Give a child fish and you feed him for a day. Teach a child how to fish and you give him an occupation that will feed him for a lifetime. This proverb will never be cliché as it mirrors the reality that faces many youth around the world. And for African youth, the proverbial lifetime occupation starts with education. Access to education is a challenge that continues to ail the African continent as it is no cheap endevour. However, with the help and partnerships of such organizations as The Africa-America Institute, Ford Foundation, MasterCard Foundation, Education Sub-Sahara Africa (ESSA), Governments and Government owned corporations among others the bridge between African youth and access to education is slowly being addressed.

At this year’s, State of Education Conference 2017 organized by The Africa-American Institute that was held in Nairobi, Kenya on the 3rd and 4th of May, the timely theme on opportunities for transforming higher education was received with enthusiasm. A unanimous chorus of how the education systems need to embrace African history and culture was repeated on both days of the conference with some of the panelists highlighting the history of education and cultural practices in the pre- and post-colonial era.

So much useful insights and ideas were shared on what needs to happen to innovate around education curriculums in Africa. Important realizations were acknowledged. Among them, the lack of required job skill sets by the workforce, the need for active partnerships between the private and public sectors that is very crucial and the importance of globally competitive education systems in Africa. A contribution shared by Dr. Manu Chandaria emphasized on the need to disrupt the state of education by dedicating a semester to practical experience through attachment in the workforce to ensure practical knowledge exchange occurs. This is a great idea, however, the intricacies of making this a reality would be quite the task when factoring the number of corporates versus the number of students that would need placement. Already in Kenya, for example, a young lawyer waiting admission to the bar needs a 6-month pupillage placement to qualify. Unfortunately, with the increased student intakes over the years, many times students have had to delay their admissions because they had to take turns to undertake the training period and some struggled for almost a year or two to secure placements.

Other important contributions shared include; Prof. Chacha of the Kenyan Commission for University Education highlighting the need to incorporate leadership, ethics and governance skills in education curriculums to foster social equity.  A much-needed tweak bearing in mind the political situations in various African countries; and Nneka Okekearu, Regional Director Enterprise Development Center, Pan Atlantic University who reminded us that our curriculums need to emphasize on skills and not just paper qualifications. After all, sometimes paper qualifications can be useless for a practical workforce. Thus, a revival of vocation and technical training institutes is very much needed today.

Going forward, to effectively transform higher education in Africa, there is need for big data collection and specialization that will help assess so many pertinent issues like the talent selection processes for awarding of scholarships, nature of courses pursued by recipients of scholarships among other crucial issues. It is noteworthy that the creative economy, especially those interested in management subjects in the creative economy, hardly benefits from scholarships as there has been a lot of emphasis on STEM (Science, Technology, Engineering and Mathematics). These various subjects are no longer strangers to each other with the growing interface between them. And with proper management skills in the creative economy there would be seamless collaborations between these faculties that will nurture the next generation problem solving innovations and keep the African economy growing.

As we explore ways of transforming higher education, without a doubt we need to recognize that the contribution of African diaspora and African youth who have had the privilege to school in the western universities should and will have opportunities to help in this transformation. Philanthropy will also go along way to guaranteeing African youth global exposure in universities outside Africa for long and short professional courses to help build capacity in future skills as well as current skills on demand. As a continent, we need to build the culture of paying forward to also sustain philanthropy and the spirit of giving in the name of education.

A great parting shot by Dr, Ouisseina Alidou, a professor African-American Studies at Rutgers University, “Africans need to embrace that they are part of the world. There is nothing wrong with being a westernized African.” We just need to continue doing what we do best. Putting a dash and a sprinkle of African culture in everything we touch or create!

Perhaps soon the education sector will realize that traditional knowledge and cultural expressions should have a role to play and realize they are stake holders as the international community begins conversations about traditional knowledge and cultural expressions as intellectual property rights; another kettle of fish befitting its own blog post.

Founded in 1953, The Africa-America Institute (AAI) is the premiere U.S.-based international organization dedicated to strengthening human capacity of Africans and promoting the continent’s development through higher education.  AAI’s mission is to promote enlightened engagement between Africa and America.  More than 15,000 AAI alumni are at the forefront of Africa’s public, non-profit, and private sectors.

Follow:
UPHOLDING INTELLECTUAL PROPERTY RIGHTS IN THE PUBLISHING INDUSTRY. DOES DESTRUCTION OF THE PIRATED BOOKS SOLVE THE PROBLEM?

AFRICAN DECLARATION ON INTERNET FREEDOMS: WHY THIS IS RELEVANT TO KENYA

You Snooze, You Lose: Tough Lessons for Fashionprenuers against Fashion Empires

AFRICAN DECLARATION ON INTERNET FREEDOMS: WHY THIS IS RELEVANT TO KENYA

Have you read the...